Niagara Falls has a strong reason why it deserves one of the world’s best natural wonders. Even though it is illegal to do some daredevil acts, many people still try to do the action for it is regarded as crazy yet prestigious by others.

Niagara Falls is located in the official border between New York (the US) and Ontario (Canada). Both of them are united to draw up the Niagara Gorge’s southern point. Niagara Falls consists of three collective waterfalls called the the Bridal Veil Falls, Horseshoe Falls and the American Falls.

Canada has the Horseshoe Falls, while the US has the two others. The boundary was established in 1819 but now it is disputed because of construction and erosion.
The charm of the natural wonder never wears off despite the controversies. Many newlywed couples selected resorts around Niagara River for their honeymoon.

For those who want to marry in here, there are wedding chapels in the area for a quickie wedding. Hotels and resorts are scattered, trying to draw more visitors to come and stay.
It was during the last ice age that the Niagara Falls was formed. When glaciers faded at the end of the Wisconsin glaciations, water from the Great Lakes made its own way to the Atlantic Ocean through the Niagara Escarpment.

Besides for tourism industry, the Niagara Falls is also used as a significant source of hydroelectric power.
The Inniskillin Winery is recommended for romantic couples. Meanwhile, family with kids in the group can visit the Niagara Parks Botanical Gardens and the Aquarium of Niagara or Marine Land. The kids can also learn about Niagara Falls’ history through a couple museums in the area.

The language used on American-side Niagara Falls is of course English. In the meantime, even though Canada has two official languages, most people on the Canadian-side Niagara Falls choose to speak in English other than in French. Just like the custom in the United States, visitors always leave a 15-20 percent tip for quality service at restaurants. Hotel workers will also appreciate the same amount of the tip. Unfortunately, most restaurants in the area are chain and fast food restaurants. Fine dining restaurants are easier to find on the Canadian-side than on the American-side.

Here are some travel tips if you intend to visit Niagara Falls in the near future:
–   Most people choose the Canadian-side to enjoy the falls as it is seen as a more beautiful place than the American-side. Furthermore, the selection of hotels and restaurants are also wider.
–   Most Canadian-side hotels and restaurants accept US dollars and major credit cards for the payment.
–   However, by seeing the currencies at the time you may also exchange money before crossing the border to get the advantage of the fluctuation.
–   Many vendors sell cheesy souvenirs and drinks at unreasonable price.
–   Do not trap yourself in the slot machines. There are many more valuable things to do than spending money on such a wasteful game. 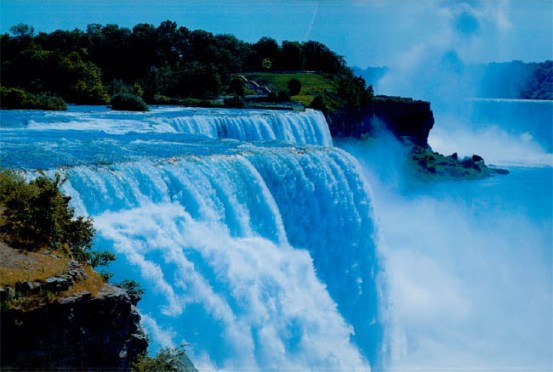