We can all name some of the most famous festivals and cultural events around the world. New Orleans and Mardi Gras, along with Rio de Janeiro and Notting Hill Carnivals, are a few of the biggest and most spectacular. The yearly Bull Run in Pamplona, Spain, must be one of the most dangerous, and, also in Spain, throwing several thousand kilos of tomatoes at the La Tomatina festival must be one of the messiest.

If you want to experience all the fun and excitement of a festival, but with a different theme, there are plenty of unusual ones to choose from. 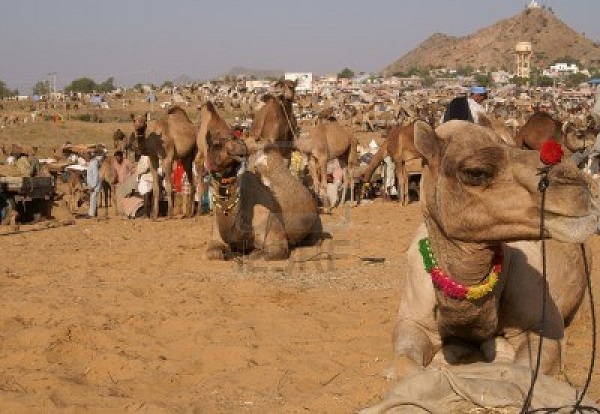 Every November, around 200,000 people descend on the little desert town of Pushkar. The date does vary a bit, but it’s always at the same time as the Kartik Purnima full moon. Far more than just a camel and livestock fair, the 50,000 camels that are brought along are subjected to some bizarre treatments before they are sold. If you have ever wanted to see camels in a beauty contest, make sure you get to Pushkar. They get shaved and dressed up before being entered into the competition, and after that, there are parades and races before the sale. The camel fair is held on the banks of Lake Pushkar with numerous stalls selling rural crafts as well as all manner of bells and jewelry for today’s modern camel.

Cheung Chau Bun Festival, Hong Kong
The competitors race to climb up to the top of an 18-meter tower and grab as many buns as they can. The buns, which have been blessed, used to be real, but for safety reasons they are now plastic. There is quite a bit of good-natured violence amongst the teams who climb the tower as they compete for the buns. The festival lasts for four days and includes operas and parades with opportunities for children to dress in spectacular costumes. For three days, everyone follows tradition and goes vegetarian with even McDonalds only selling veggie burgers. (http://www.cheungchau.org/)

Tyrnavos, Greece
Tyrnavos is in the middle of the Larissa wine region, so the ancient God of Wine, Dionysus, is very important. Dionysian parties were known to be lewd in ancient times, so the celebration includes drinking brandy from phallus-shaped cups. The festival is called Dirty Monday and there is a lot of phallic objects paraded up and down the streets, along with a fair amount of suggestive teasing. There are some people who disapprove of such wild and uninhabited fun, but people of ages come and take part, including children. 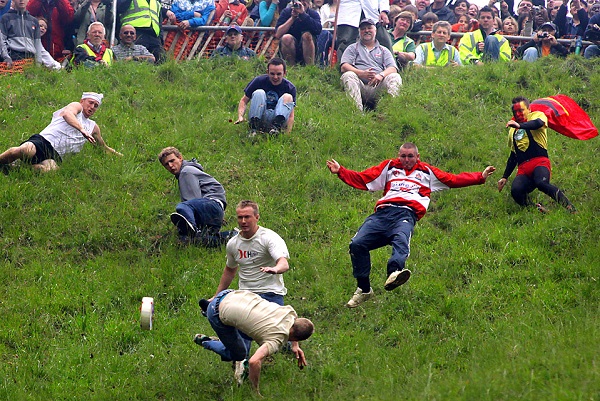 What could be simpler than rolling a wheel of cheese down a hill? Maybe chasing after it and catching it! The 9-lb round of Double Gloucester cheese gets a one second head start down the three-in-one hill, reaching speeds of 70 mph, and has been known to injure the odd spectator or two. Rules are simple; the first competitor over the line wins the cheese.  The event has been going for hundreds of years and was originally just for the local village of Brockworth. Now it attracts people from all over the world who come to watch and take part in this Spring Bank Holiday event in the beautiful English Cotswolds. (http://www.cheese-rolling.co.uk/)

The Shinto Kanamara Matsuri, Kawazaki, Japan
The main focus of this event is the penis. Everywhere you look, there are decorations, carved vegetables, sweets, and candles in the shape the subject. The events take place around a penis shrine that is the home of legends and prayers, and giant phallic symbols are carried through the streets.

Hadaka Matsuri, Japan
An almost Naked Festival in Japan where minimum clothing is worn, usually a loincloth. There are many such festivals all across the country, but the biggest one is Saidai-ji Eyo Hadaka Matsuri in Okayama. The festival can be held in the summer or winter, and in Okayama over 9,000 men take part. At midnight, the crowds fight to get their hands on a pair of lucky sticks thrown into the crowd by a Shinto priest. If the winner is lucky enough to put the sticks in a rice-filled wooden box, tradition says that his next year will be a happy one. (http://www.jnto.go.jp/eng/location/spot/festival/saidaijieyohadaka.html)

In this Thailand town, the macaque monkey population is huge. While anywhere else would call them pests, in Lopoburi they are looked up to as the bringers of good luck and roam freely through the streets. To show their appreciation, every year the townsfolk throw a party for the monkeys by putting out 2,000 kilograms of vegetables, fruit, and other monkey delights.

El Colacho (Baby Jumping Festival), Castrillo de Murcia, Spain
On the feast of Corpus Christi every year, this rather strange festival sees men jumping over babies. Since 1620, the men of the village have dressed up as devils and then jumped over a row of babies lying in the street. This rather weird form of baptism is supposed to rid the babies of original sin.

Body skewering, various locations in Malaysia, Singapore, and India
In January/February time each year, a Hindu festival celebrates the birth of Shiva and Parvati’s son, Murugan. Thaipusam is where the head of the participant is shaved and a pilgrimage is undertaken. At the end of the pilgrimage, sharp skewers are stuck through cheeks and tongues. Some people pull tractors with hooks that are inserted in their backs. The more pain you endure, the more blessings you will receive from the gods. 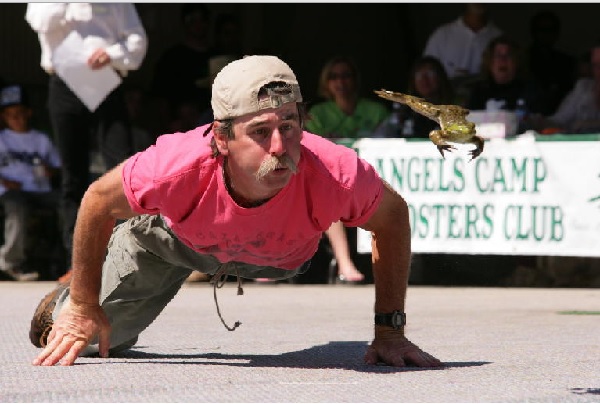 Thousands of frogs each year are put through their paces in elimination rounds in order to win an invitation to the main event. The frog-jumping contest is held during the three day Calaveras County Fair in May and there is plenty to do and see apart from the frogs. The frog-jumping event was first held in 1928 and the current record holder is Rosie the Ribiter who made a jump of a rather impressive 21 feet and 5.75 inches (around six meters) in 1986. (http://www.frogtown.org/)

Charak Puja, Bainan, West Bengal, India
On the last day of the Bengali calendar, men strip their shirts off and wait in line for their turn. For what? To hang from a bamboo pole for a ritual of course. Other bizarre forms of self-torture take place, like being swung on a rope round a pole from the hook in your back. After that, the walking on hot coals and body piercing sounds tame.

Goat Tossing, Manganeses de la Polvorosa, Spain
The patron saint of the Spanish town of Manganeses de la Polvorosa is St. Vincent de Paul. On the fourth Sunday of January, a young man of the village performs an age-old ritual in the saints honor. Once the young man has found a goat in the village, he ties it up and carries it up to the top of the church tower. No one knows how many hundreds of years this has gone on, for but once the goat is up in the tower it quite simply gets thrown out. If the goat is lucky it is caught by the villagers below in a tarpaulin. The event has been banned by village officials and complained about by animal rights activists. Despite all this, the festival still takes place every year. (http://en.wikipedia.org/wiki/Goat_throwing)